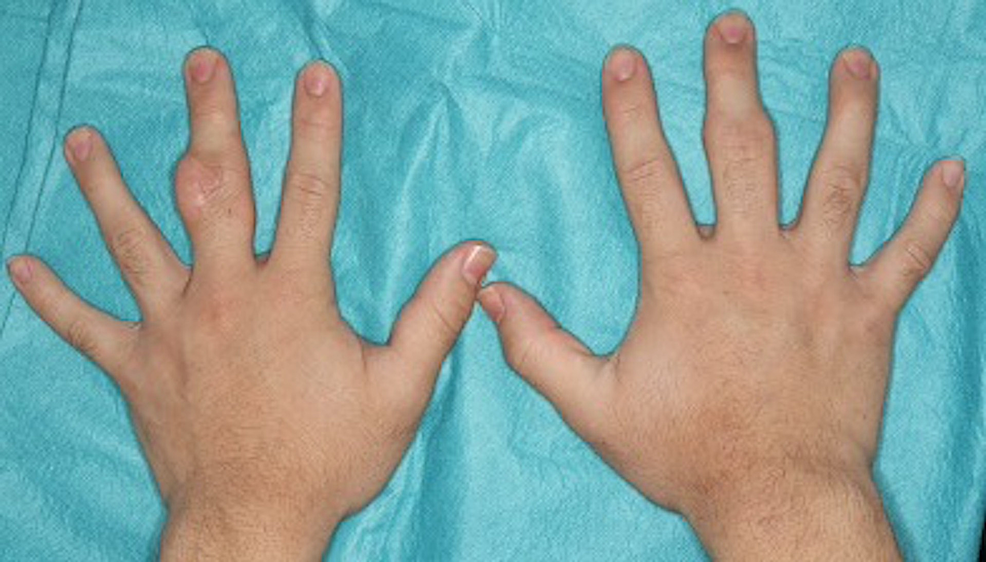 Pachydermodactyly (PDD), which refers to “thick-skinned finger” in Greek, is a rare, non-inflammatory, benign superficial fibromatosis first reported in 1973 by Bazex [1]. The condition manifests in the radial and ulnar aspects of the proximal interphalangeal (PIP) joints of the left and right hands without damaging the articular structures or bone. Currently, there is no proven effective treatment for TED, and non-surgical treatment is often recommended because TED is a benign tumor. Additionally, some patients prefer surgery for cosmetic reasons. However, there have been few reports of surgery for PDD [2,3]. Here, we present a case of successful surgical excision of PDD in a 15-year-old boy.

A 15-year-old boy was referred to our reconstructive plastic surgery department with asymptomatic swelling of the PIP joints on the third finger of both hands after several years of progressive development. He started biting the swollen lesions, especially those on his left hand. He was part of a basketball club in his high school. He had no medical history of obsessive compulsive disorder or psychiatric disorder and no family history of connective tissue disease. Physical examination revealed thickening of the skin in the radial and ulnar aspects of the PIP joints of his third finger of both hands without functional limitation or neurological symptoms (Figure 1).

Soft tissues were swollen around the proximal interphalangeal (PIP) joints of the third finger of both hands.

The soft tissue swelling was greater on the left hand. Plain x-rays of the hands showed no bone destruction or narrowing of the joint space (Figure 2). Magnetic resonance imaging of the hands revealed soft tissue thickening outside the radial and ulnar collateral ligament of the PIP joints of the third finger of both hands. Bony cortex, ligaments and joint space were intact. On the T1-weighted image, the lesions appeared hypointense, whereas on the STIR T2-weighted image, they did not appear as hyperintense as water (Figure 3AB). 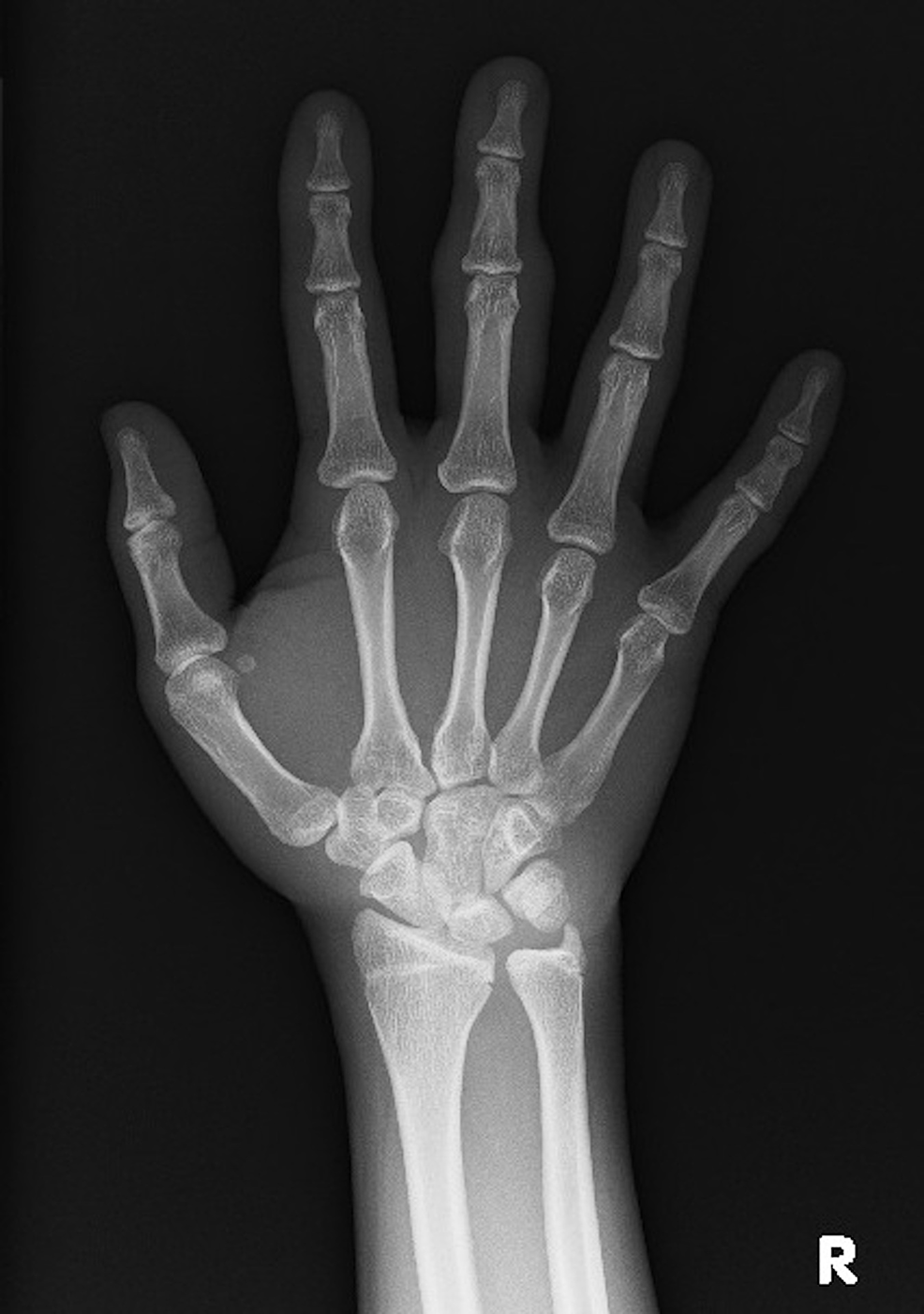 Plain x-rays of the hands showing no bone destruction or narrowing of the joint space. 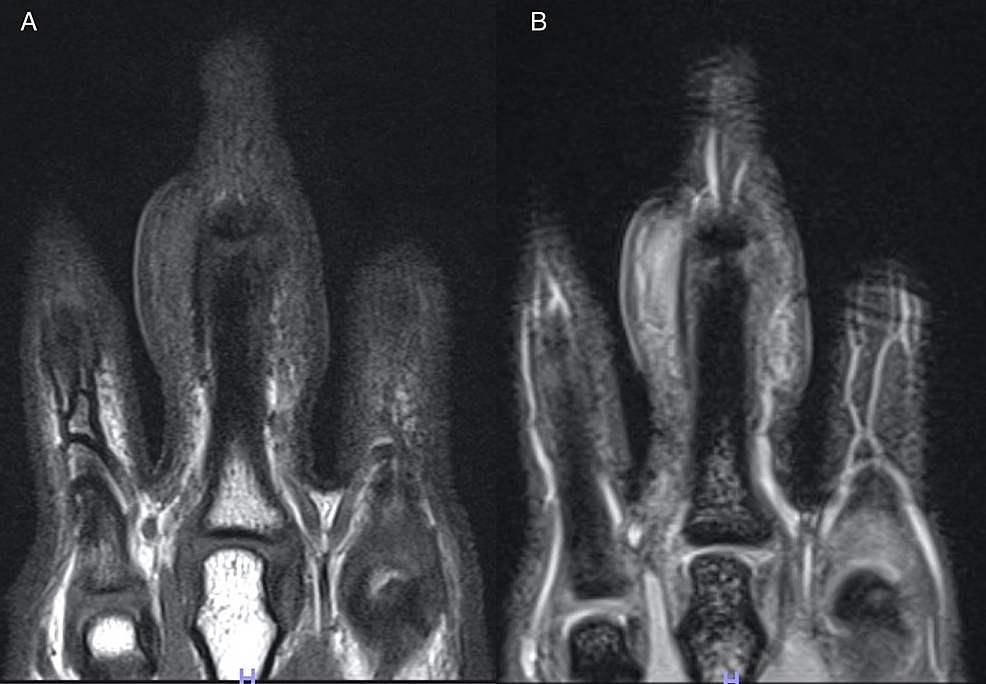 A) On T1 weighting, the lesions were hypointense.

B) On a T2-weighted STIR image, the lesions were not as hyperintense.

The lesions were suggestive of TED. The patient requested surgical excision to confirm the diagnosis and improve the aesthetic appearance of his hands. Under digital block, the lesions in his left hand were dissected over the radial and ulnar collateral ligament and removed en masse through a mid-axial incision to preserve the neurovascular bundles. The neurovascular bundles were located on the volar and medial sides of the lesion. A cord which was suspected to be the dorsal branch of the digital nerve running from the palmar side to the dorsal side to the deeper layer of the lesion, was preserved. We cut away the excess skin and closed the incision creating a Z-plasty at the radial and ulnar sides of the PIP joints (Figure 4A-D). 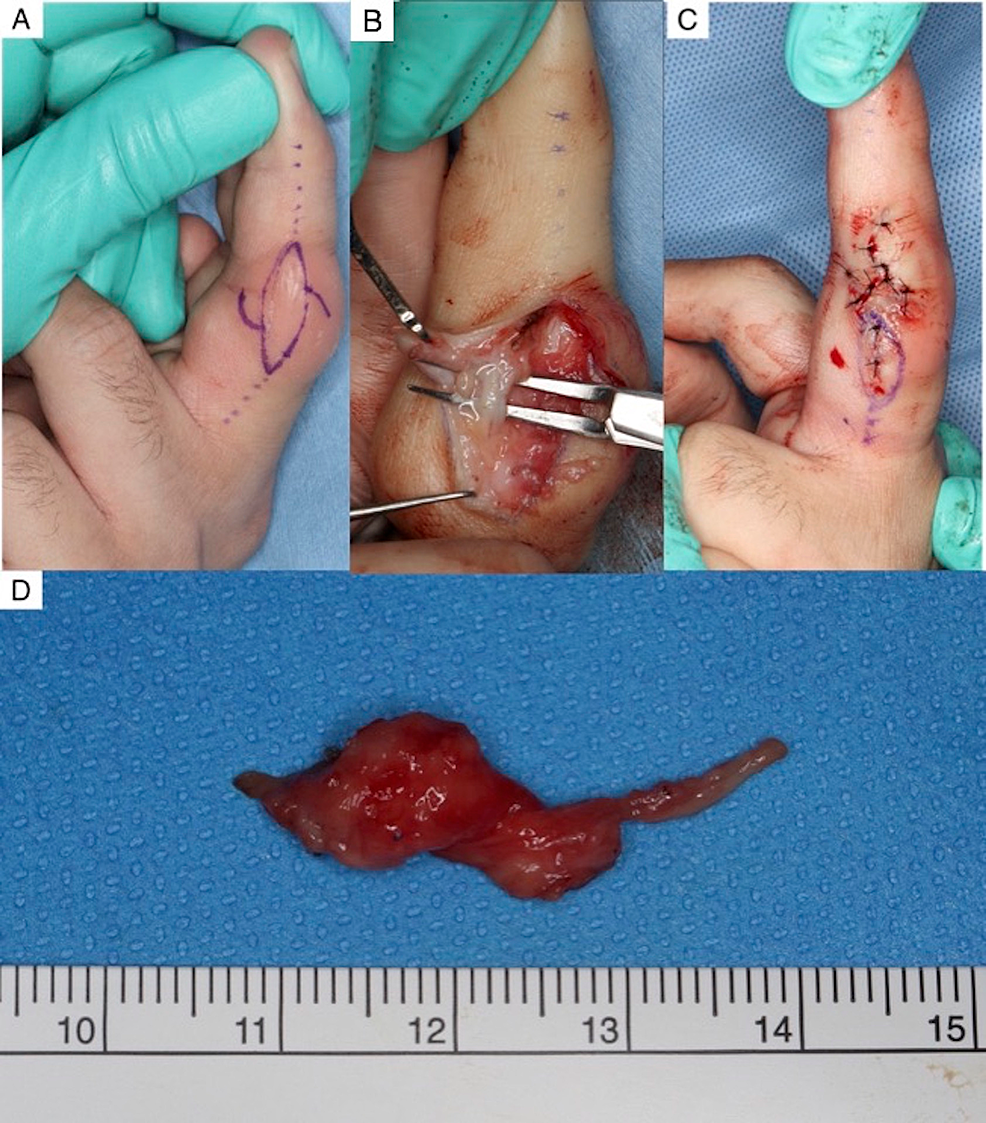 A) The design of the midline axial incision with a Z-plasty.

B) The lesion was located lateral to the radial and ulnar collateral ligament of the proximal interphalangeal (PIP) joint of the third finger. The neurovascular bundles were located on the volar and medial sides of the lesion.

C) The surgical site was closed with 5-0 nylon.

D) Gross examination showed that the lesion was composed of soft tissue thickening.

Histopathologically, the lesions were characterized by orthokeratotic hyperkeratosis, acanthosis and thickening of the dermis due to an increase in the number of fibroblasts and collagen with a weak infiltration of lymphocytes. These results are compatible with a diagnosis of PDD (Figure 5). 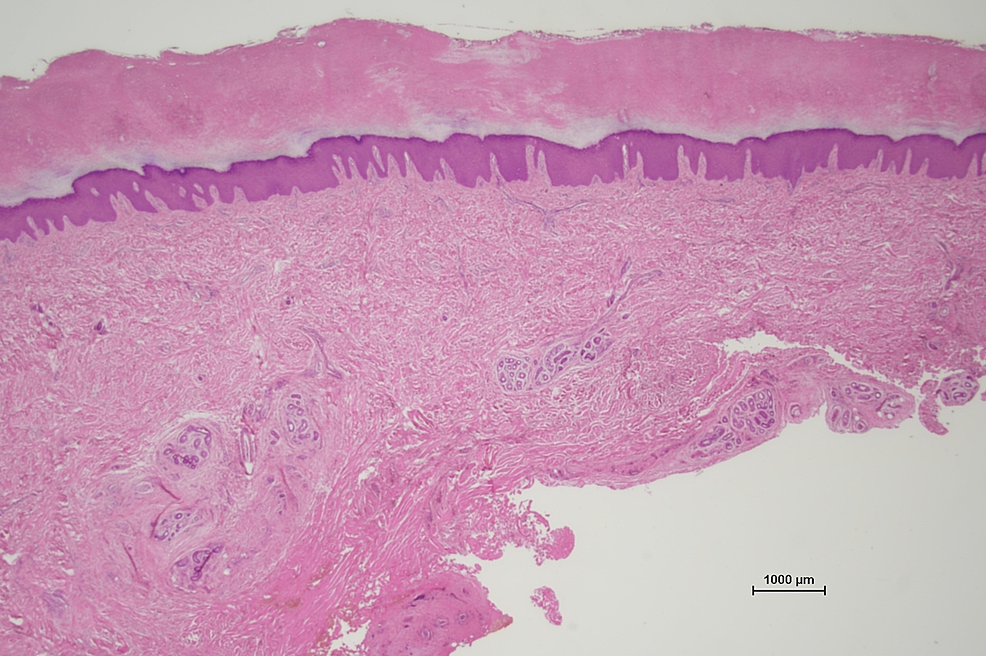 Histopathological examinations revealed hyperkeratosis and thickening of the dermis.

After an operation on the left hand, the patient underwent the same operation on the right hand. No recurrence was observed at one year follow-up after surgery. The patient was satisfied with the contour of his fingers and had no sensory paralysis in the dorsal region of the finger nor limitation of movement (Figure 6AB). 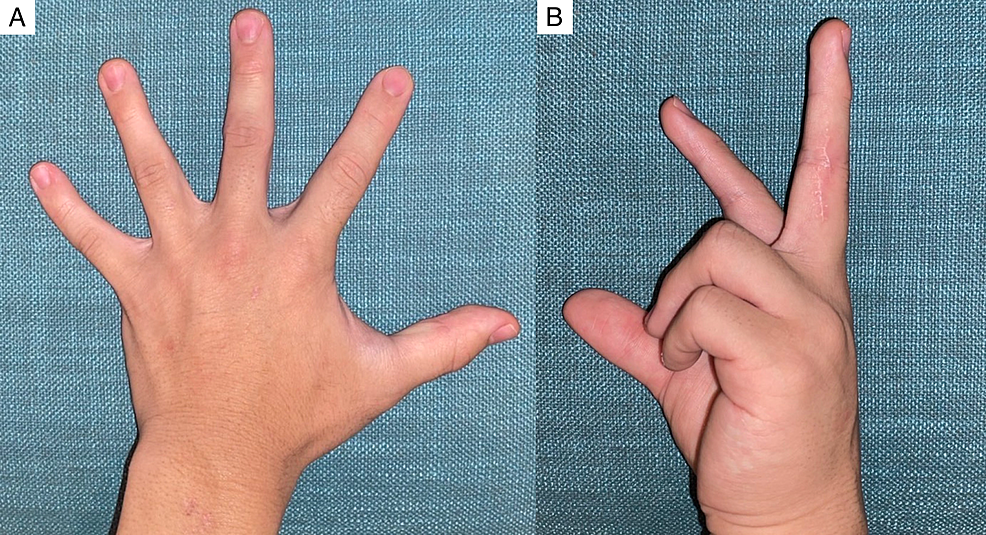 A) The contour of the digits is considerably improved. The scar is imperceptible on the dorsal and ventral sides of the hand.

B) The patient has no limitation of movement.

The etiology of PDD is unknown, but minimal repetitive trauma from work or habits may be linked to its onset. Some authors have reported that PDD is linked to neuropsychiatric disorders [4]. The common presentation is swelling around the PIP joints of the third finger, sometimes in the distal interphalangeal or metacarpophalangeal joints of all fingers, with no damage to the articular structures, no morning stiffness, no pain, and no tenderness to palpation. Often lab test results are normal and x-rays/magnetic resonance imaging show only soft tissue swelling [5]. Histopathological features are characterized by orthokeratotic or parakeratotic hyperkeratosis, acanthosis, and thickening of the dermis due to an increased number of fibroblasts and type III and V collagen [4,6]. The patient’s habits, history of finger manipulation, clinical features, radiographs/magnetic resonance imaging, and histological features were typical of PDD. His habit of biting his fingers, especially those of his left hand, may have resulted in more extensive damage.

To our knowledge, there is no consensus regarding the treatment of PDD. Non-surgical treatment, such as stopping mechanical trauma to the skin, is prioritized due to the benign nature of the tumor [4]. Another non-surgical treatment modality involves the use of intralesional injection of triamcinolone or post-oral collagen synthesis inhibitors such as tranilast [6]. However, these provide limited improvement in finger swelling. A case describes surgical resection for PDD and achieved good results via volar zig-zag approach [3]. Here, the lesions were resected through a midline incision. The midline is determined by connecting the vertices of the flexion crease, noting the point of change between the dorsal and palmar aspects, and noting the finger in full flexion (Figure seven) [7]. 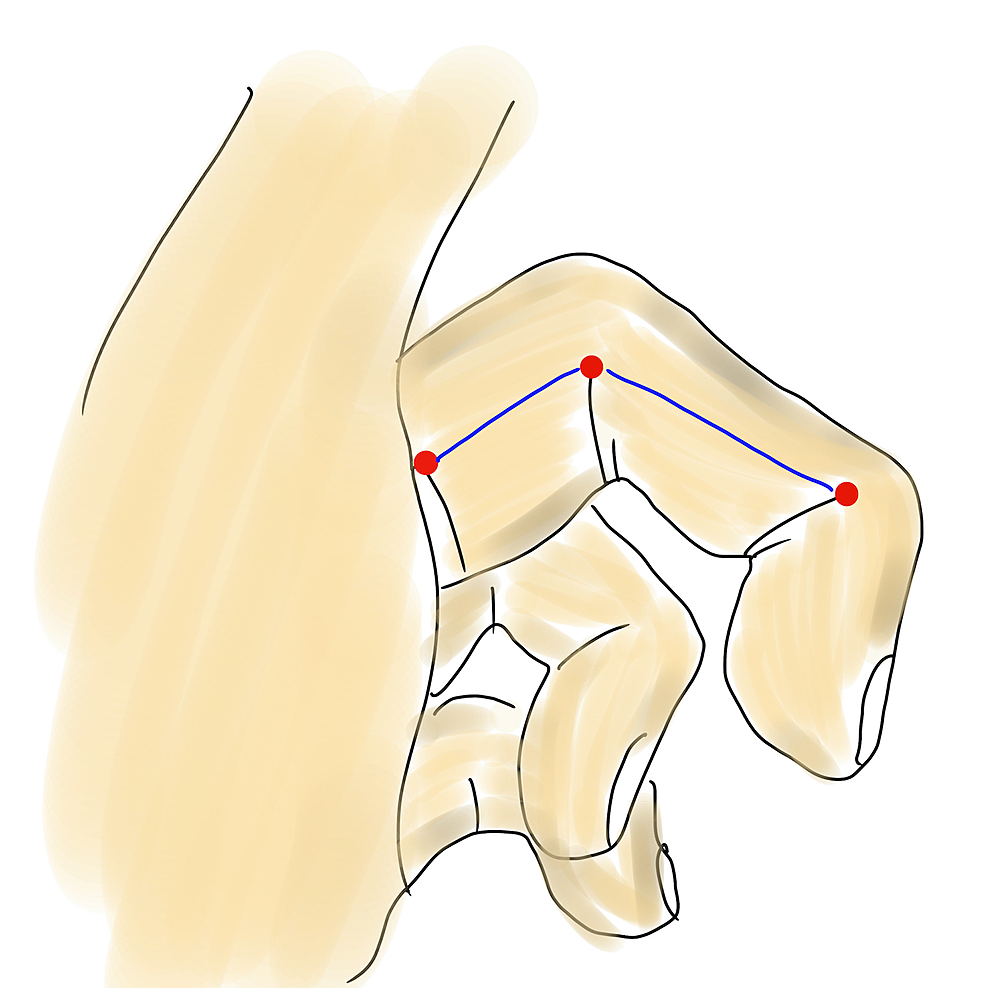 The midline (blue line) is determined by connecting the vertices of the flex crease (red dots).

The midline incision is recommended for PDD because it results in no skin tension, full flexion or extension, and imperceptible scarring. The dorsal branch of the digital nerve of the third finger branches at the level of the proximal phalanx (87.5%), the metatarsophalangeal joint (10%) or the palm (2.5%) [8]. Thus, special attention should be paid to this limb when using the midline incision approach. As the PDD arises from the epidermis and the dermis, it should be located in the outer layer rather than at the level of the neurovascular bundles [4,6]. However, to our knowledge, there are no reports regarding the relationship between PDD and neurovascular bundles. This may be because non-surgical treatment often takes priority. In the present case, neurovascular bundles were present on the palmar side of the lesion and the dorsal branch of the digital nerve branched at the level of the proximal phalanx, near the deeper layer of the lesion. Therefore, both nerves were preserved.

We have experienced a case that had a good outcome for TED digit deformity after undergoing surgery via a midline axial incision. This incision is an imperceptible healing without any complications. Thus, a midline incision may be a good approach for patients who wish to rectify the appearance of their digital deformity.

2022-06-09
Previous Post: I’m an interior design expert and my hack will make your room more expensive while saving you money
Next Post: OpenSolar and Segen launch a smart system for designing, proposing and ordering solar equipment