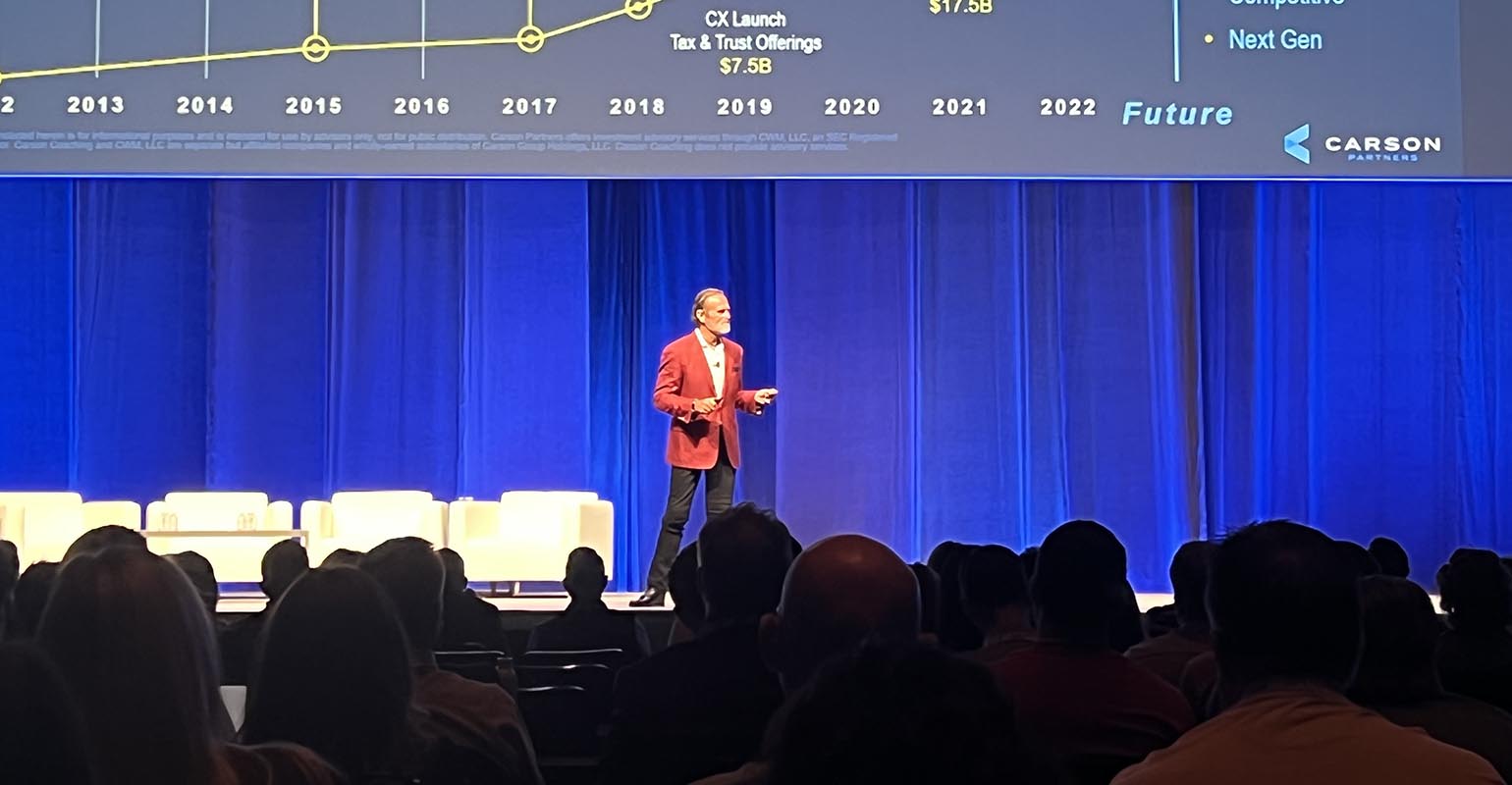 Ron Carson: “If it ain’t broke, break it”

Carson Group hosted corporate partners ahead of its annual Excell conference this week at the Cosmopolitan in Las Vegas, announcing several new developments at a partner summit on Tuesday.

“Our value proposition six months from now will be far greater than what we have today as we build an infinite business,” said Ron Carson, the charismatic leader of the Carson “Collective”. “We play the infinite game to unlock your infinite potential.”

“I’m here to tell you that what you’ve seen so far is absolutely nothing compared to what you’re about to experience,” said Carson, who admitted mistakes have been made over the past 40 years. . The company’s focus has shifted from providing a great experience, something he called table stakes in today’s industry, to a focus on “high-impact convenience.” High-impact convenience represents the next level of consumer service, he said, building trust and delivering simplicity.

Burt White, the former LPL investment strategist turned Carson evangelist, received a round of applause and a few whistles from the roughly 1,100 partners in attendance when he announced the new model portfolio hub.

“What it lets you do is create a model and bind multiple clients to that model,” he said. “One, two, 15 or a hundred. And then each time you edit the template, it goes through and does it for the 100 clients that are linked to the template, unlike today where you have to enter each one.

The hub is expected to launch early next year. Next month, White said, Carson will roll out a new investment research content portal that offers more functionality than the traditional dashboard.

“The (traditional) dashboard for me is the useful information witness protection program,” he said. “So we also make it really ugly.”

The new site will resemble Carson’s Marketing Hub, offering daily research blogs, weekly podcasts and short videos from Carson’s investment leaders that can be shared with clients, and providing asset allocation advice in an easy to read table.

“And to be able to help you manage those assets, we’re going to have portfolios coming in the new months that will use those internal views,” he said.

“Over the next few months, in a staggered fashion, we’re going to be announcing a ton of new stuff,” White said, including up to 200 new ETF options from BlackRock and State Street that will be available in October.

“Think about the asset classes that are not available to you today,” he said. “High-yield bank loans, commodities, individual countries, sector industries, you want to reduce the duration? There are wonderful ETFs in there that are short-lived. Want to add revenue? Want to think about inflation hedges? Want to add gold?

Nimesh Patel, who was named Carson’s first chief technology officer in February, said the company is also focused on creating intuitive board and customer interfaces, similar to how Apple is evolving design. iPhone by studying how users interact with it.

“Consumer experience is much better resolved in many industries,” he said. “Everyone figures out how to engage a consumer, give them the right information. We haven’t done that in financial services.

Using proprietary partner data and Carson’s 40 years of experience, Patel said his team develops intuitive interfaces that can predict advisors’ needs and direct them through proven, streamlined processes to attract, retain, serve. and grow their customer base.

“Every change we make at Carson, every capability we build at Carson, and every product we release at Carson is going to be data-driven,” he said. “It takes you from spreadsheets to a workflow to a recommendation engine that tells you the likely success of that workflow so you can focus on the good stuff. It’s about taking your quantitative data and adding the dimensions of behavioral data and giving you unique insights. »

Another new initiative that will enter a second phase of testing in October has already started generating new leads for companies joining the program, executives said. A contact center dedicated to finding prospects and connecting them with partner companies, based on geography or specialization, has referred more than 170 potential customers since the start of a pilot program in April.

Developed in conjunction with Boston Consulting Group, the “Lead Acquisition Engine” is a three-stage funnel, using marketing efforts across multiple channels, including digital marketing and SEO, to generate leads that flow through a center of sale where the representatives examine them. The platform, using an “optimization engine”, places these leads on the calendars of participating advisors.

“It’s been miraculous,” said Abbey Henderson, CEO of Abaris Financial Group, a Carson partner who participated in the alpha testing phase. “The call center’s ability to pivot in real time, learn new things and deploy them for the next call is just amazing. There are probably two big takeaways. One is that when you have a proven process that you can replicate time after time, that makes it work for everyone because the call center knows what you’re going to do and you know what you’re going to do when the lead lands in your lap.. I think that the other thing is that I’ve underestimated the true value of a warm handoff. When these leads end up in my office, to a large extent, they already trust us. They already understand the process.

Jamie Hopkins, managing partner and social media spokesperson for Carson, said the center is typically able to contact potential clients within 2 minutes of receiving a lead. “We’re not quite done testing all the parts,” he said, “but we know which parts work today and which we’re ready to scale.”

“We’re going to push it,” Carson said. “Like, we’re going to do things. We will continue to look for ways to be unique and help you stand out, not only to your customer, but also to your community and your prospects.

“If it ain’t broke, break it,” he said. “And we look at everything at Carson.”