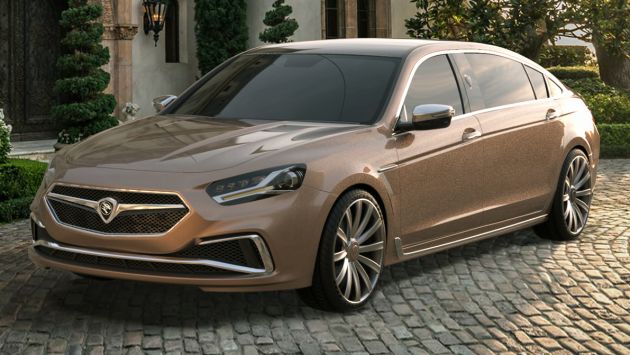 The work of Saharudin Busri has graced the pages of this website on several occasions in the past. The design manager of the National Research and Development Center for Information and Communication Technologies, MIMOS, has released several design proposals for future Proton vehicles over the past two years, and his latest comes under the shape of an elongated version of the Perdana, called the executive.

If you look at the stretched Perdana limousine currently in use by Acting Prime Minister Najib Tun Razak, you will notice that the middle section features an awkward step in the waist line and up shoulders, as the car still uses the standard rear doors of the car. the eighth-generation Honda Accord on which it is based.

The solution, according to Saharudin, is to simply use new, longer rear doors as seen on Proton’s original Executive models, giving the car a smoother and more progressive waistline and shoulders. The standard Perdana’s six-window design was retained, but with the tilt of the rear door edge reversed. Saharudin also gave the car a major makeover, with a new front end featuring trapezoidal headlamps with Y-shaped daytime running lights, as well as a hexagonal grille that gives the car a look reminiscent of the last Opel / Vauxhall. Insignia. On the side, the L-shaped chrome strip is reminiscent of the BMW 7 Series G12, and you will also find new air vents still very fashionable.

The tail lights also have a trapezoidal shape – it’s a very similar design to the Geely Bo Rui, albeit with a red strip connecting the lights instead of a chrome trim. Meanwhile, the license plate recess was moved from the bumper to the trunk lid, and the body-color diffuser and twin faux “tailpipes” were banned for more stylish contrasting items.

The standard Perdana is already a very nice car – aside from the painted diffuser and fake exhausts, of course – so we’re a bit on the fence about these updates. And you? What do you think? Sound off in the comments section after the jump, and you can also see some of Saharudin’s earlier work below.

2018-05-02
Previous Post: Launch of a new interior design course from May 14 to 18
Next Post: Just In: Snøhetta unveils new design proposal for Philip Johnson’s AT&T building