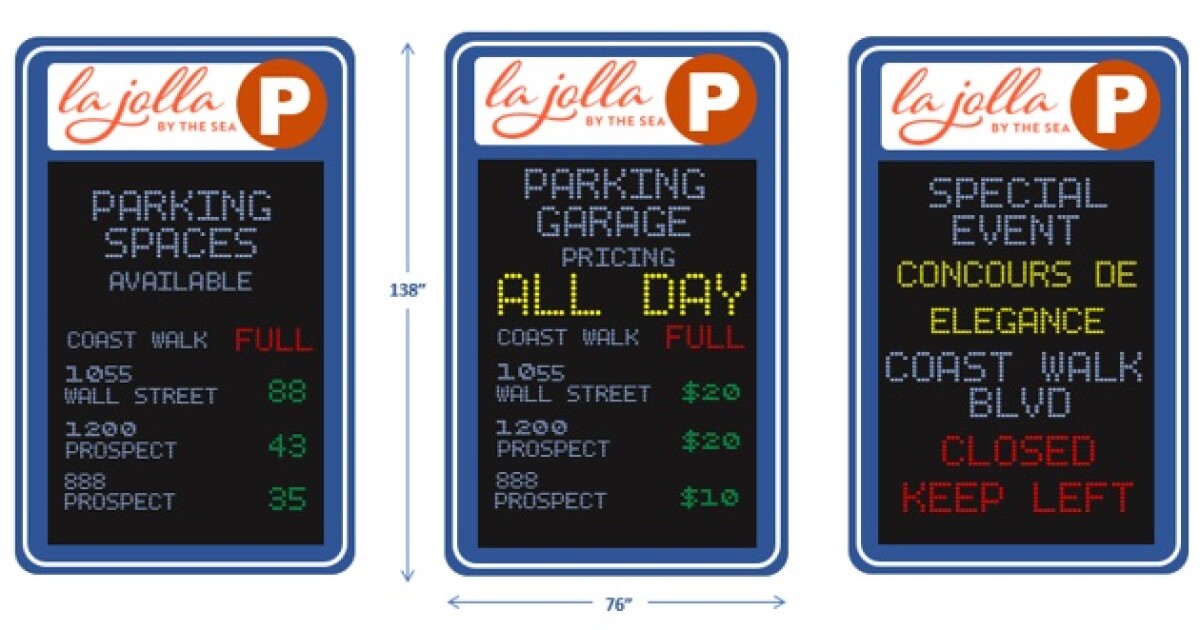 ‘Not a good fit’: Initial design proposal for La Jolla parking sign program receives warm welcome from board of directors

As the La Jolla Coastal Access and Parking Council directional sign program circulates with local planning groups, a question has arisen: What will the signs look like? No design was chosen, and the concept renderings presented at the February 25 board meeting raised concern among some members that they were too “futuristic” or “imposing.”

The proposal received design approval from the La Jolla Village Merchants Association, the Planned District Ordinance Committee, and the Traffic & Transportation Board.

In his presentation to the groups, CAPB member Jodi Rudick, Executive Director of the Village Merchants Association, said question # 1 was about the appearance of the directional sign.

“All the information in the world doesn’t matter if there is no way for the public to see it,” she said.

Brad Elsass, vice president of strategic initiatives for Ace Parking and consultant to the board, and Marc Miller, San Diego regional sales manager for Texas-based FlashParking – the board’s first choice to manufacture the signs and install hardware and software – introduced the concept of renderings and information on how the sign would rotate its posts at regular intervals.

Miller noted that the design was not final and that the board did not adopt any draft rendering.

“The futuristic LED signage display is what we offer… and the signs can have multiple messages running at the same time. The sign can indicate the available places, then a page with the prices of these garages and finally a third [page] can announce something that’s going on in The Village, ”Miller said.

The proposed sign could be 8 to 11 feet tall, but Miller said the size can be adjusted based on the needs of the community.

“As a sign it’s attractive, but I’m afraid it’s not a good fit for The Village,” said CPAB member Nancy Warwick. “You said futuristic. I wonder if the framing of the sign could be more coastal and like a village. It would be one thing if it was in front of a mall, but it’s not something that I think fits into The Village.

Administrator Ray Weiss added, “I think the biggest criticism we’re going to get is from residents who don’t want it to be too big. We live here, it’s not just for tourists. The sign may need to be toned down… there will likely be objections if it is too prominent.

Questions arose about how drivers would access information and make a decision safely.

Weiss said there was concern about creating a traffic hazard and added that “the first person to be stopped by someone writing down information as they scrolled across a screen is going to sue the owner of the sign, so we have to be careful about that. “

“A lot of people who come in don’t expect to see a parking sign,” Warwick said. “So a tourist can enter, not know where to park, make that turn, press the brake [and] look up addresses ”, not knowing where they are.

CAPB Chairman Brett Murphy, who is also on the Village Merchants Association and Planned District Ordinance committees, wondered if the board could contact other groups with design expertise for information. and possibly renderings.

Rudick said she was working with Vision La Jolla and Enhance La Jolla, which administers the maintenance assessment district in the village, “about the long-term overall aesthetic of La Jolla” and said that they would like to be involved in the appearance of the panel. .

Vision La Jolla is an ad hoc committee of the La Jolla Town Planning Association. It is made up of architects Andy Fotsch, Brian Will and Trace Wilson, real estate agents Patrick Ahern and John Shannon, and engineer and historian Matt Mangano. Its mission is to work with groups seeking to update regulations that apply to village development or major village improvement projects.

“Vision La Jolla volunteered to review this to make sure it fits into the overall idea they have… because it’s the missing piece,” Rudick said. “We have to get this approved, so we have to use the signage that will be the friendliest to the public we serve. “

The board has agreed to work with Vision La Jolla on design suggestions for the panel and possibly sketches to be discussed at the next board meeting at 4 p.m. on Thursday, March 25, online. Learn more about lajollabythesea.com. ??