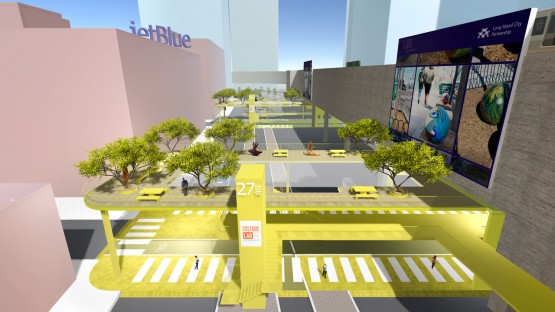 In the heart of Long Island City – across the East River from downtown Manhattan – is the Queensboro Plaza subway station.

It is a long elevated platform made up entirely of steel beams, rails and trains. Under the station, crossing the boulevard is not for the humble, as pedestrians hope to cross the big streets in time to escape high-speed cars and trucks. Above, the trains rumble and generate an endless cacophony of loud noises.

Thanks to the design, pedestrians can one day walk safely and noise can be reduced.

In partnership with professors from Cornell’s Department of Planning and Land Use, the College of Architecture, Art and Planning (AAP), as well as professors and students from Cornell Tech, students at the The Jacobs Technion-Cornell Institute completed a Cornell pilot course this semester. – Urban design strategies and case studies. Using New York City as a laboratory, students integrate augmented reality (AR) and virtual reality (VR) into a tangible, tech-driven world.

The result: a return of humanity.

“With the Queensboro Plaza area, students researched how to create a welcoming and safer place,” said Robert Balder ’89, executive director of Gensler Family AAP NYC. Balder was the creator and co-instructor of the course, which is part of the core curriculum of the new Jacobs Urban Tech concentration. He co-taught the class with Sharon Yavo Ayalon, Technion B. Arch ’01, M.Sc ’10, Ph.D. ’19, Postdoctoral Fellow at Cornell Tech. Ron Brachman, professor of computer science and director of the Jacobs Technion-Cornell Institute, worked with Balder and Ayalon to develop the course.

“From an urban design perspective,” said Balder, “this is an opportunity to improve the quality of life on the streets and to make navigation easier. Students think about the connections.

Each of the course’s four student teams has engaged with a New York City Business Improvement District, or BID. In addition to the Long Island City partnership, the students focused on the Flatiron / 23rd Street partnership in Manhattan, where the neighborhood boundaries extend; the Village Alliance, with an emphasis on University Place, a road connecting Union Square and Washington Square Park in Manhattan; and the Downtown Brooklyn Partnership. The students made the final presentations on May 20.

As for the Long Island City team, the group came up with pedestrian walkways with improved lighting and safety, more space to relax – during lunchtime, for example – in an elevated space with art, benches and a view.

Using a standard Unity game engine – learned during the course – the team created a virtual reality demo to show the different phases of the possible project. Chris Morse, M. Arch ’16, guest speaker, led the Unity training throughout the semester.

“We created the virtual reality demo to convey our idea in an immersive way to different stakeholders,” said student Matan Amihai, team member from Long Island City. “It helps them better understand how our intervention can create a better and necessary urban environment for pedestrians. “

In addition to Amihai, the other members of the Long Island City team are Jeremy Shaffer, Harrison Yu and Cheng Gong.

While LED lights are bright on Broadway, the Flatiron / 23rd Street partnership aims to merge technology and art to cast animated lights on historic buildings – using the buildings as a backdrop – along the Broadway corridor to the south. of Times Square.

Their idea aims to showcase historic buildings and architecture, use AR on smartphones to increase foot traffic in local restaurants and shops, engage creative institutions, identify strengths of the local neighborhood, and promote pedestrian safety.

Sometimes you need a village alliance. This team of students took a strategic approach to encouraging engagement along the University Place corridor.

“Community engagement can sometimes be confusing,” the Village Alliance team said in its report. “Neighborhood residents are invited to respond to proposals they often don’t understand – on a scale over which they have little control. What if we could change that by reversing the power dynamics and allowing the community to lead improvement efforts at University Place? “

So instead of asking people what they want, the team wants to empower people to self-organize the projects that are most beneficial to them. The group has created a gamified mobile application that allows community members to take ownership. The community can initiate pop-up projects funded by crowdfunding, provide personalized assessments of road infrastructure, and communicate with other visitors, businesses and local authorities.

In the heart of downtown Brooklyn, a team of students noticed new residents moving to Brooklyn, as the Fulton Street hallway is experiencing a renaissance. The team looked for ways to tell this story.

The solution: an orientation app that presents augmented reality on their new “Midday in Brooklyn” app. Learn the history of Brooklyn, understand the present, and take a look into the future. The team: Jeanne Li, Lars Kouwenhoven, Jiadong Lou, Alex Amy and Merav Tal-maon.

Ayalon explained that the company needs to integrate technology into urban design. “Our cities are increasingly tech-savvy – especially with the Internet of Things, self-driving cars, additional WiFi, as well as automated and responsive buildings,” she said.

The environment itself is changing and the design has to adapt. “More advanced technology and tools like VR / AR, 3D modeling and printing, light, temperature and sound simulations,” Ayalon said, “and tools like Unity can help us. to plan for better and more balanced environments.