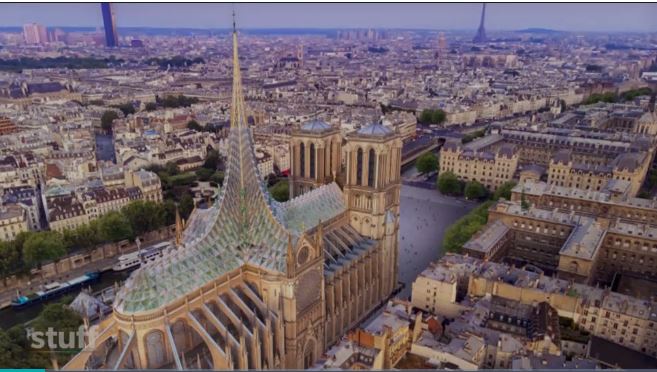 On April 15, 2019, a fire set Notre-Dame Cathedral ablaze, damaging the roof, the spire and some works of art. The world cried and efforts have since been made to revive this beloved monument. French lawmakers have announced that there will be an international design competition in the light of the damaged cathedral.

Since then, several architects have come up with different designs that could still crown the monument.

A French architectural firm Vincent callebaut presented its environmentally friendly proposal for the reconstruction of the cathedral, which the company dubbed â€œPalingenese roof designâ€.

The company’s design includes a huge stained-glass spire which is actually a greenhouse system that generates clean energy for the cathedral, the design lives up to its name. In Greek, “palingenÃ¨se” means “Renaissance”.

The architectural firm said that through energetic solidarity with the body of the historic monument, the contemporary three-dimensional Gothic stained glass grafting would produce all the electricity, passive ventilation and heat that the entire cathedral needs. Vincent Callebaut explained that this can be done by combining advanced renewable energies and passive systems.

The three-dimensional crystal glass will be subdivided into faceted diamond-shaped elements that rest on a new set of wooden frames. Light is absorbed and transformed into energy by crystalline glass which consists of an organic active layer consisting of hydrogen, carbon, oxygen and nitrogen. The company explained that the energy stored in the hydrogen fuel cells would be direct and distributed throughout the cathedral.

The greenhouse effect is avoided because the crystalline scales open at the bottom of the framework along the acroterion of the transept of the nave. This would mimic a wind-powered chimney, creating a natural airflow up the spire.

The new roof design could also accommodate new fruit and produce from the garden. The management of the said garden, which could produce up to 21 tonnes of fruit and vegetables each year, could of course be carried out by charity workers or by agents of the cathedral. It is an opportunity for Notre Dame to organize a weekly farmer’s market on its square.

Other designs submitted for the cathedral’s new spire also took an eco-friendly approach.
Summum Architecture conceptualizes a roof that could be a sanctuary for endangered birds and insects. Studio Nab seeks to build a greenhouse that houses beehives, serving as a sanctuary for pollinators and at the same time as an educational center for the public. Studio Drift is looking to use recycled ocean plastic to build the monument’s new spire and roof.