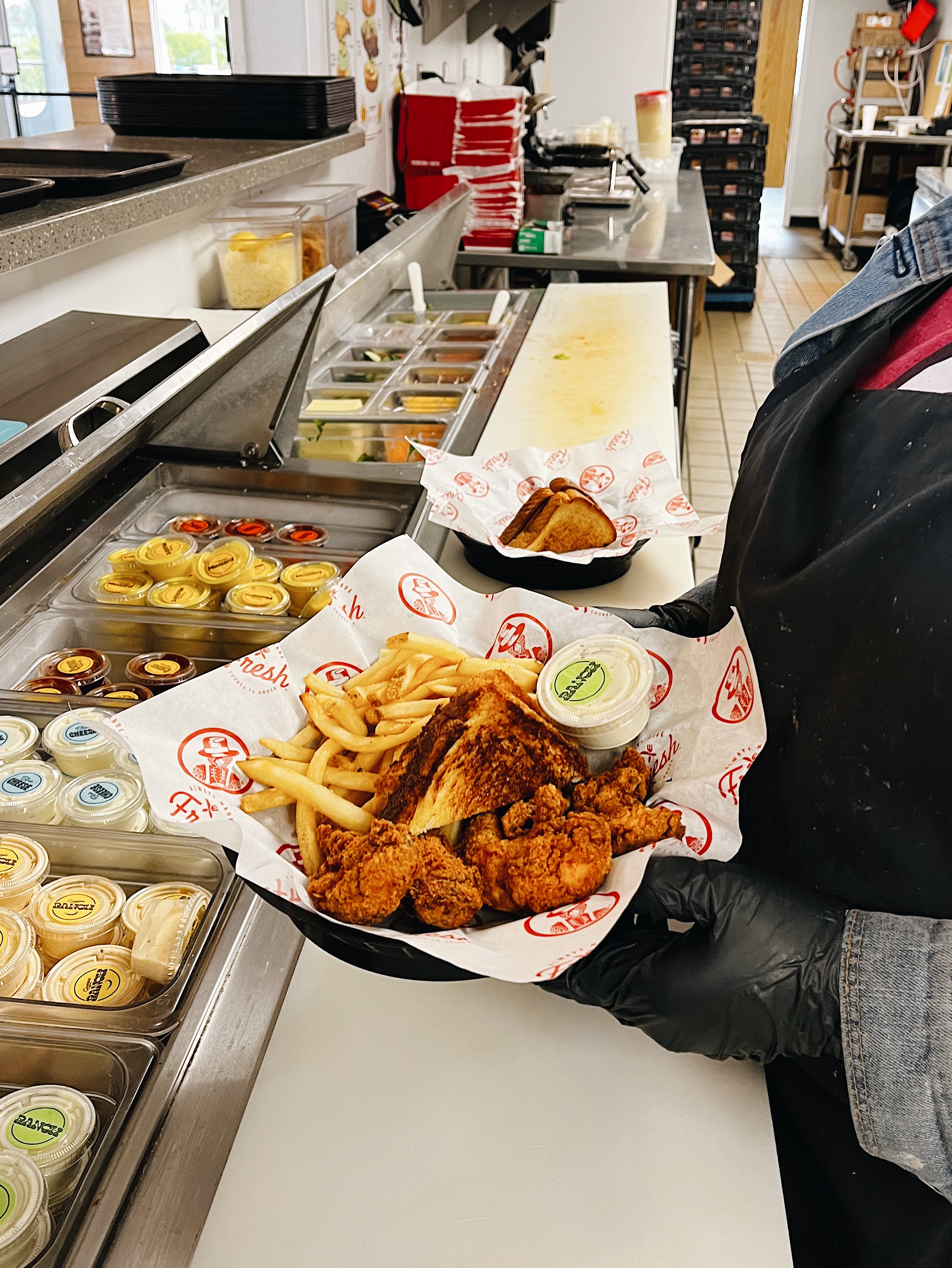 Last fall, Sodexo-run Liberty Food Services teamed up with Arkansas-based chain Slim Chickens to open a location on campus in Lynchburg, Virginia. District Manager Duane Davis and his team were looking for a concept to replace Doc’s Diner, where sales were plummeting. “It operated as a restaurant for a while, but recently turned into a mini dining hall. We weren’t getting as much satisfaction from the students. It had started to lose its shine,” says Abraham Zahabi, managing director of Sodexo retail operations at Liberty.

The Food Services team suspected they had found their new concept when they came across the Slim Chickens brand at a conference. “It seemed like the right fit for the campus,” says Zahabi. “We already had another chicken concept [a Chik-Fil-A] it was super busy. Adding another would help us capture what was needed to make students happy.”

Moving Slim Chickens to the location of the old Doc also solved the problem of adding new dining options to the east side of campus, where services were limited. “Doc’s was the only dining option on this side of Route 460, which is a four-lane highway through town, so we wanted to put something in there,” Zahabi says. The east side location has also created an opportunity to get more business from residents of the community. “We wanted it to be able to work when the students aren’t around,” he adds.

Renovating the stand-alone building required a major overhaul. “We tore up all the interiors, redid everything and added new lighting,” says Zahabi. The old dining room style setup was ditched for a digital ordering register and kiosk, creating more seating space. A patio has been set up for outdoor dining, while a drive-thru has been set up for take-out meals. The overhaul took three full months. “We closed after graduation in May 2021 and did not reopen until September 15 [after the fall semester had started]“, says Zahabi.

While the restaurant was being updated, food services were training to learn the ins and outs of running a Slim Chickens franchise. Sodexo executives and supervisors spent several weeks in training stores in Arkansas, learning everything from how to bread chicken, hire and train employees, and report sales. When the Liberty location opened, staff members from Slim Chickens came to train hourly employees. “They worked side by side with us every day, for about 10 days, until they were comfortable with what we were doing,” Zahabi recalls. The brand is still visited monthly and external audits are carried out to confirm that the Liberty site meets Slim Chickens standards. “They follow up on employee training and make sure we have what we need,” he says.

Slim Chickens at Liberty follows the same menu as the other franchises: fried and grilled chicken tenders, wraps, chicken sandwiches, chicken and waffles, as well as sides, shakes and desserts. “The soft ones are their mainstay and they’re the most popular, and the mac and cheese is by far the most popular side,” says Zahabi, who notes that the shakes are a significant contributor to incremental sales. Mason jar desserts like strawberry cheesecake, Oreo cheesecake, or brownie pudding topped with whipped cream are also big hits. Students can pay with catering dollars, but not with meals, a design feature implemented to make the restaurant more accessible to residents of the community.

Liberty’s franchise is one of the largest in the Slim Chickens portfolio, with seating for over 220 customers. And it’s always busy, especially on weekends and during dinner hours. (The location is open from 11:00 a.m. to 11:00 p.m. every weekday.) “Not only has it met the needs of people on the east side of campus, but it’s been so popular that we have people coming from campus main as well. It became a destination,” says Zahabi.

And the proof is in the numbers: Slim Chickens averages 735 more customers per day than the old Doc’s Diner, and meal scan data shows it also significantly outperforms Chik-Fil-A existing. “The flow of traffic has been a direct reflection of product quality and the overall dining experience,” District Manager Davis said. “The environment is more welcoming and the food is delivered faster.”