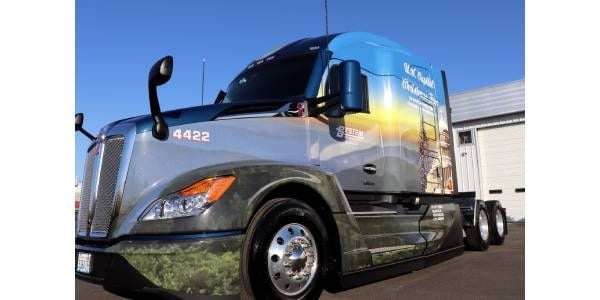 â€œSix Rivers, Many Peoples, One Treeâ€ is the theme of this year’s tour, and a logo of this message is prominently displayed on the roof of the T680 Next Gen. The driver and passenger sides both display graphics of the United States Capitol, the United States Capitol Christmas tree decorated with lights, and a background of the sunset over the hills of the Six Rivers National Forest. The words â€œUS Capitol Christmas Tree, Six Rivers National Forest, California to Washington DCâ€ are placed above the images.

This 2021 US Capitol Christmas tree – an 84-foot-tall white fir nicknamed “Sugar Bear” – is expected to be harvested Oct. 24 from Six Rivers National Forest in California.

System Transport is the designated official carrier for the 2021 tour. The company will use its new Kenworth T680 Next Gen equipped with a 76-inch mid-roof sleeper to transport the special tree on its 3,300 mile route. T680 Next Gen Gives Drivers Most Aero Kenworth Truck Ever, Latest Kenworth SmartWheel, New Fully Advanced Customizable 15-inch Digital Display LED lighting on the road, extra advanced driver assistance systems, and comfortable cabin and berth. This is the eighth consecutive year that a Kenworth truck will deliver “The People’s Tree”.

The company transports all types of flatbed cargo, primarily from the West Coast to the Midwest. System Transport is headquartered in Cheney, Washington, with terminals in Denver and Phoenix; French Camp, Fresno and Bloomington, California; Caldwell, Idaho; Gary, Indiana; Olathe, Kansas; and Ennis, Texas.

2021-10-20
Previous Post: Clinical Trial Management Systems Market to Reach US $ 1,941.4 Million by End of 2027, According to Coherent Market Insights
Next Post: Open Text: The Future of Digital Asset Management (DAM 3.0)