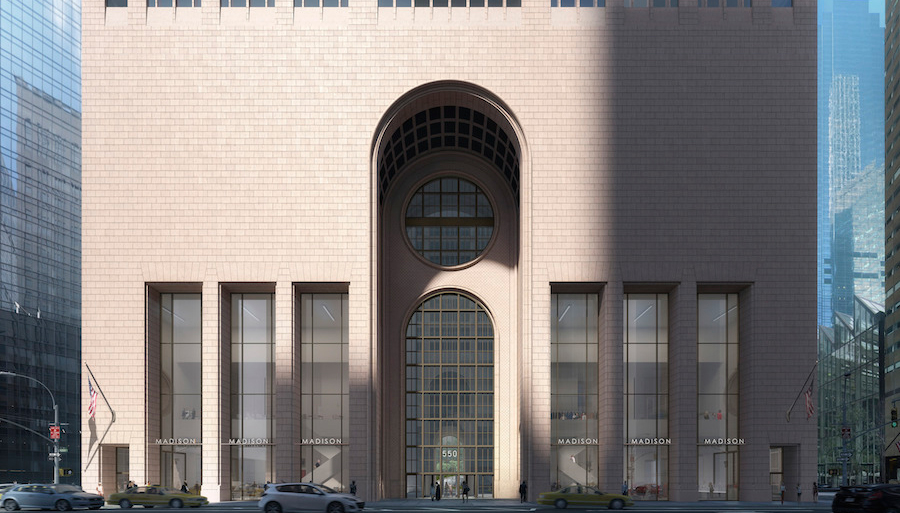 After its first design proposal for the now-iconic postmodern icon sparked an outcry from conservatives, the company revealed a clean-lined overhaul, which invites history and audiences to come back.

When Philip Johnson received a questionnaire from telecommunications giant AT&T in the early 1970s – a veiled request for a quote for a new headquarters in New York – he threw it away. Despite this offhand gesture, Johnson and his partner John Burgee not only landed a plumb order, but also designed what is now considered the world’s first postmodern tower.

AT&T was a critically mixed bag (Ada Louise Huxtable called it a “pastiche”; Albert Speer would have admired it) and practically (its basic arcades were dark and off-putting), but it earned Johnson the first American architect, the cover of Time.

Johnson’s building, renamed 550 Madison, is now empty, but it is still controversial. Last October, SnÃ¸hetta unveiled a proposal to peel the facade off the lower level of the building and cover it with fluted glass. The New York preservation community summarily rejected the plan and demanded that the building be marked. Norman Foster weighed in. Even Robert AM Stern, unhindered by an orthopedic boot, limped out of his office to join a protest in favor of the building.

Despite the backlash, SnÃ¸hetta and his partners, Olayan America and Chelsfield, have remained silent on their plans, refusing interviews in favor of brief statements to the press. Now, more than a year since, SnÃ¸hetta unveiled its revised design for the tower, which SnÃ¸hetta partner Craig Dykers says will â€œpreserve and revitalize the buildingâ€.

The new renderings reveal a significantly reduced design approach, a move expected in light of recent tramlining. Indeed, according to the architects, 94% of the original surface of the buildings will remain unchanged.

“This is not the first time that we have had to work with very different opinions,” says Dykers, referring to the company’s work on the 9/11 museum in New York. “So we tried to hear what everyone had to say, filter out the madness, bring up the important things and respect them.”

Unlike the original design, SnÃ¸hetta opted to keep the stone facade and restore the original 60-foot windows (a ’90s renovation by Gwathmey Siegel covered them to conceal the mechanics) with minimal mullions. By reintroducing this glass and reorienting the building’s original elevators, passers-by along Madison Avenue will have a view directly through the building.

â€œWe re-evaluated the facade and respected the masonry elements,â€ explains Dykers. â€œBut we also knew that wouldn’t solve the challenge either, because we want to bring people back to this building. “

This goal resulted in two major design decisions: the first, to cover the arches with stone and fill them with retail space; the second to open the back of the building to create an open-air public garden. This square is perhaps the redesign’s biggest selling point. The space, currently occupied by an empty glazed annex, originally housed shops. But like the facade, the space has been transformed over the years with additional glazing and other ad hoc additions.

SnÃ¸hetta offered to replace the original enclosure with a minimal glass and steel canopy. This structure will house a plaza with a fountain, lush plantations and heated seats in winter. The circular patterns of the hardscape are a direct nod to the circular patterns of the 550 Madison facade and Philip Johnson’s love for platonic geometries. Basically, the garden will increase the amount of public space on the site by over 60%, enough to bring East Midtown to the recommended allocation of public space in New York City, as dictated by planners.

“There are in fact families who live there [in East Midtown] now it’s not just advertising agencies and so on, â€insists Dykers. â€œWe will just be a welcome addition to the community. “

550 Madison owner Olayan America and developer Chelsfield hope to create a unique offering for future office tenants, a historic, yet contemporary, alternative to new commercial developments such as Hudson Yards. Ultimately, the team says they will pursue a LEED Platinum rating.

But the new design still faces several hurdles, including the blessing of the local community council and the city’s monuments commission. Designs have yet to be revealed for the building’s interiors, including the office spaces and lobby, which were dismantled last January (these spaces have not been marked). According to Dykers, “we are focusing on what is needed to get approval so that the design of these spaces is not developed.”

Ultimately, Dykers hopes to bring people back to 550 Madison, a building he has a soft spot for: â€œIt opened the door again for ordinary people because it’s something they could recognize,â€ says- he. “It might not be intellectually vigorous, but it made people love architecture again after years of heavy stuff being thrown at them.”

Johnson, for his part, would likely have embraced the suspense and the spotlight that comes with it. Defend AT&T in the New York Times, three days after Christmas 1978, he wrote: â€œWe are entering an era whose name I do not know and even those who say they know the name of do not know the name of. But it is a great adventurous pluralist future.

You may also like “The Power and the Paradox of Philip Johnson”.