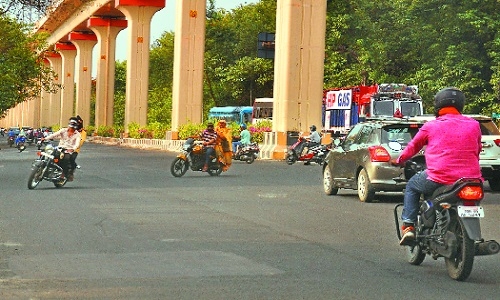 Creating an intersection in front of NKY Tower near Ajit Bakery, Haldiram in Ajni can provide commuters with access to all roads and will help in better traffic management, asserted Janakrosh, a social organization working in the area of road traffic management.

At present people coming from Kriplani Square or Food Corporation of India (FCI) Godown are unable to go to Deonagar or RPTS or vice versa so they choose the wrong side creating a situation accidental. Previously, there was an opening in front of the NKY tower from where commuters had access to all roads. But, it had become a barrier because it was used without any planning, so it was closed during the construction of the subway and the double-decker bridge (the double-decker bridge reaches the Pride hotel).

Janakrosh member Prakash Khandekar investigated the problem personally, prepared a solution and submitted it to Sarang Awad, Deputy Commissioner of Police (DCP) (Traffic) with maps and points. Khandekar proposed that the current opening near the clock tower be closed.

The intersection in front of the NKY tower near Haldiram and Ajit Bakery has a peculiar configuration. There are five routes. Two sections of North-South Wardha Road (1) from Rahate Settlement and (2) from Chhatrapati Square. To the east is (3) the FCI Godown road, and to the west is (4) the RPTS road and (5) the Deo Nagar Khamla road. There are two junctions J1 and J2. J1 junction of Wardha Road (from Rahate settlement) and FCI Road is separated from J2 junction Wardha road (from Chhatrapati Square), RPTS road and Deonagar Khamla road by about 50 meters. At this J2 junction, another free left branch of FCI Road connects, Khandekar pointed out in the letter.

Khandekar in the letter said, “The gap between the subway pillars has been opened at J1 junction and automatic lights are being installed. The gaps between the pillars of the subway near the J2 junction are completely blocked. Traffic from all directions is heavy during peak hours. There is a major problem for traffic from (1) and (3) wishing to go to (4) and (5). There is no arrangement and all this traffic goes against the traffic of (2) Wardha road to Rahate settlement causing continuous risk and conflict.

Khandekar also suggested five sets of automatic signals, one for each road. This can be located on the traffic island. These will run one at a time with a preset (differentiated) cycle time. Therefore, traffic from one route at a time will work and no conflicts will arise.

Of course, to make this arrangement more convenient, parking on this road needs to be streamlined.

Khandekar explained, “Vehicles are parked haphazardly on the side of the road and on the sidewalks, forcing pedestrians to walk on the road and significantly reducing the width of the road. There is no organized parking lot though there is the metro station, many crowded shops like Haldiram, Ajit Bakery and many more. Shared centralized parking is offered near the clock/jail/FCI grounds. At first, parking at ground level is offered. No parking will be allowed along the roads or on the sidewalks.

“A systemic solution has been provided. Detailed engineering design can be done after approval in principle. A basis that traffic from anywhere to anywhere should be able to travel without risk, was the main pillar of the suggestion/solution,” Khandekar said while elaborating on “The Hitavada.”