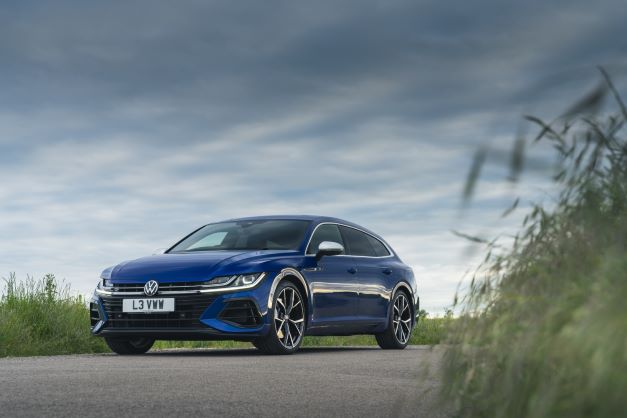 The desire for spacious interiors, always synonymous with luxury, drives interior designers to use new combinations of electronic and mechanical functions to modify or relocate pre-existing systems such as heating/cooling and audio installations. In terms of controls, touchscreens offer space-saving possibilities, but designers face the problem of distracting the driver’s attention. The latest generation Arteon Shooting Brake seems to have struck the right balance.

Since its launch in 2017, Volkswagen’s interior designers have since redesigned the entire dashboard – consisting of the cockpit, surfaces, air outlets, trim and center console – including the dashboard section. infotainment and climate controls – as well as the upper sections of the door trim. The analog clock has been removed. The net result is a minimalist layout that runs in a straight line and with a clean form.

The door trims are covered with new, more pronounced leatherette surfaces with decorative stitching, visually creating a connection with the Touareg. On the dashboard, applications in real wood (Regal Eucalyptus) or metal (Hatched and Aluminum Black Carbon) add a touch of class. Its ambient lighting is adjustable thanks to no less than 30 colours. The color chosen illuminates the decorative trim on the instrument panel, door trim and storage areas, front footrests and center storage compartment. The digital instruments and the infotainment system also adopt the selected background color.

HVAC dial controls have been replaced with touch sliders for automatic climate control and a new multifunction steering wheel with touch controls. The temperatures of the optional Climatronic can now be adjusted via a touch slider. The same applies to the blower function in manual mode. Seat heating, windscreen and window defrosting functions and other air conditioning controls are also controlled using the touch-sensitive surfaces in the center console.

The feeling of space in the front and rear seats is noticeable with plenty of legroom. Outboard rear seating takes the form of contoured individual seats, while the third seat (center) is reasonably comfortable all told. The central seat position also features an armrest that can be folded down, and behind it is a large pass-through opening that comes in handy when loading long bits and pieces.

Size-wise, thanks to its roof design, the Shooting Brake version offers additional headroom front and rear of 1008-1019mm (+11mm) in the front and 883-835 mm (+48 mm) at the rear. The interior width is also identical: 1,500 mm at the front and 1,481 mm at the rear. As standard, the rear seat backrest can be folded down asymmetrically on both models. Behind the rear seat of the Arteon Shooting Brake is a boot capacity of up to 565 liters if you load up to the rear seat backrest and luggage compartment cover (fastback: 563 litres). Loading the vehicle up to the roof and the front seatbacks will increase the load capacity to 1,632 liters (fastback: 1,557 litres). The maximum length of the loading area is 2,092 mm in each case (to the front seats).

On the connectivity side, the now wireless integration of applications via App-Connect Wireless for Apple CarPlay and Android Auto, and a high-end audio system from Harman/Kardon. It uses a 16-channel 700-watt Ethernet amplifier to power 12 speakers. One speaker acts as a center speaker in the dashboard while another functions as a subwoofer in the trunk. The other treble, midrange and bass speakers have been placed in the doors. The infotainment system coordinates individual sound control of the audio system which also provides pre-configured settings, such as Pure, Chillout, Live and Energy.

The MIB3’s infotainment systems are positioned above the climate controls: Ready 2 Discover (8-inch touchscreen with optional navigation function), Discover Media (8-inch with navigation system, standard in Germany) and Discover Pro (9.2 inches with navigation system). New in this context are natural voice control, an upgrade option and the use of compatible smartphones as a mobile key.

Every car has a laminated windshield, of course. For some time, however, Europe has been leading the way with the adoption of laminated side windows for increased vehicle comfort and safety. The first North American vehicle with laminated side windows was introduced in 2002 as market demand caught up in Europe. Today, there is a clear upward trend for laminated side glass, especially for entry door applications due to the acoustic benefit that comes with this value-added product. The Arteon we released last week had optional front laminated windows, supplied by Fuyao. Laminated glass offers a noise reduction of three to six decibels compared to tempered glass.

Laminated side glazing has other benefits that go beyond cabin noise. The use of laminate drastically reduces the penetration of UV rays into the vehicle. Other benefits such as safety and security are also considerations for automakers.

Notably, the Arteon is the first VW capable of reacting to parameter changes along the route – operating within system limits. The car’s ACC uses a radar sensor (for distance monitoring), a camera in the windshield, and route information from the navigation system. Using the camera and dynamic display of interconnected traffic signs, the Arteon can observe speed limits as well as city limits. At the same time, the car determines its position and predictively adjusts vehicle speed before turns, islands and junctions using the front camera and route information from satellite navigation.

It also includes the automaker’s second-generation Emergency Assist. If the driver becomes incapacitated for health reasons, the system slows the car within system limits, but also directs it into the slow lane to perform an emergency stop, traffic behind permitting.

The driver is first warned and “awakened” by acoustic, optical and haptic (braking shock) signals. If the driver still does not react, the emergency assistance system is triggered with an emergency stop.

Once seated with the engine purring, you immediately feel engaged with a sense of anticipation. While the lack of physical HVAC dials and buttons won’t suit everyone, its simple cockpit covered in soft-touch upholstery and supportive leather seats make it an undeniably comfortable place to sit for a few hours. This five-seat long-range cruiser with a convenient and flexible luggage compartment compares well to its premium rivals. It also feels practical, spacious and sturdy. Rival station wagon models include the BMW 3-Series and Mercedes-Benz C-Class.