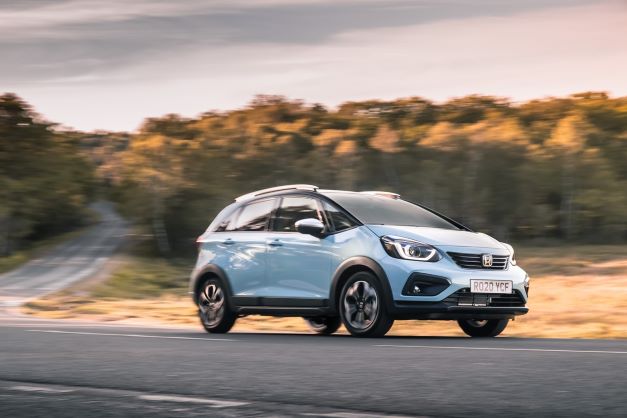 There are four trim levels for the Jazz: SE, SR, EX and Crosstar EX. The fashionable SUV styling of the Crosstar Executive variant is available with the same hybrid powertrain and interior features as the standard model, it offers increased ride height, “water resistant cloth seats” and crash rails. integrated roof. Its hallmarks include a bolder front grille design, black cladding around the wheel arches and sleek side sills. Crosstar-specific 16-inch silver and black alloy wheels complete the look. It’s also slightly longer (by 46mm), taller (37mm) and wider (31mm) than the standard Jazz.

The latest generation Jazz, also known as “Fit” in some markets, has even more space and technology than its predecessor. Honda’s “magic” seats fold and fold into a range of configurations to carry passengers and items. We’ve seen this same arrangement on other Honda models for a while, but it’s still impressive. Luggage capacity (with the rear seats up) starts at 298 liters and increases to 1,199 liters (up to the roof with the rear seats folded down). This is partly thanks to the packaging of the hybrid drivetrain components in the chassis and in the engine compartment.

The positioning of the fuel tank in the center of the chassis under the front seats is also essential to maximize space in the cabin, which is a first in this category. The packaging and overall design also allow for a wider tailgate opening and a new continuous flat floor that makes loading and unloading the trunk easier.

To further increase driver comfort, the position of the brake pedal has been modified to optimize the foot angle providing a more natural foot placement. Additionally, to support taller drivers, the original two-spoke leather steering wheel is now two degrees straighter and the adjustment range has been revised to allow the steering wheel to be positioned closer to the driver. All in all, it makes for a nice place to sit.

Further back, adults seated in the Crosstar’s second row travel in relative comfort thanks to the redesign of the seat structure allowing the hinges to be moved away from the passenger’s hip points. Rear legroom of 986mm – made possible by the torsion beam suspension layout – and the thickness of the seat padding which has been increased by 24mm add to the level of comfort. Designers also added smartphone pockets to the back of the front seats for rear occupants.

Forward visibility is good, partly because the thickness of the A-pillar has been more than halved, from 116mm to 55mm, with the rear pillar now providing the main structural strength. This, along with the hidden wipers and the deep, flat dashboard. offer the driver and front passenger a good field of vision. Wide A-pillars and exterior mirror design minimize noise and drag caused by wind turbulence. The steeply raked windshield and rear quarter glass allow more natural light to enter the cabin, giving occupants a greater sense of space.

The LCD touchscreen interface is designed to minimize driver distraction; the operating time of the most frequently used controls is reduced by 58% compared to the previous model. The nine-inch touchscreen lets you pinch, swipe and tap into the Honda Connect in-car audio and information system. This includes DAB and internet radio (with a welcome dial to control volume rather than a touch slider), phone interface and Bluetooth connectivity, and a rear-view camera with dynamic directions.

Below the touchscreen is a handy cluster for operating the HVAC with large dials and buttons. Plenty of storage space and storage pockets are dotted around the cabin, including a pair of useful glove boxes.

The suite of apps can be rounded out with smartphone mirroring, enabled by Android Auto and Apple CarPlay, the latter available wirelessly for the first time in the Jazz. Even the owner’s manual can be accessed via the integrated touchscreen infotainment system or via AI voice control for customers subscribed to Honda Personal Assistant.

The My Honda+ app provides secure access to a range of in-car functions, including convenience and safety features. For example, trip information can be set up and sent from the app to the car, and it can also lock and unlock the car remotely.

For added security, the app provides location monitoring and car tracking via GPS. Smart Geofencing can also be activated to alert the owner if the vehicle crosses a predefined “geo-fence” area, as well as a security notification sent to the smartphone app if the car’s security alarm is activated.

The Honda Personal Assistant evaluates command inputs with a level of complexity beyond the capabilities of other voice-activated virtual assistants. The system includes several levels of interaction, for more precise responses to specific queries. An owner might ask, for example, “OK Honda, find me an Italian restaurant with free parking, Wi-Fi, and it’s open now.”

All vehicles come standard with E-Call for roadside assistance. In the event of an emergency, such as an airbag deployment, the car’s location is automatically shared with the relevant emergency services.

The Crosstar incorporates an eight-speaker audio system that includes an aluminum dome tweeter, Honda-exclusive Kevlar cone speakers and a subwoofer in the rear cargo area. The tweeter is integrated into the interior door handle, while the subwoofer is placed where it does not encroach on the luggage space.

A new, wider-angle, higher-definition camera replaces the previous generation Jazz’s versatile camera and City-Brake Active System sensor setup. The camera recognizes a range of road surfaces and traffic characteristics. These include detecting whether the car is approaching the outer edge of the roadway (into a grass or gravel curb), an oncoming vehicle, or drifting into another lane without indicating, and traffic signs. The camera is also able to eliminate condensation for a constantly clear field of vision.

The Crosstar is fairly quiet on the road. Additional insulation and sound deadening materials have been installed to reduce road noise from variations in the road surface, improving cabin ambience in three frequency ranges. The cabin and floor panels are separated to reduce resonance through the car’s structure, and sound insulation has been added around the dashboard. Engine noise has also been reduced through the use of resin material on the engine mount to insulate the engine bay. Sound-absorbing materials and thicker glass contribute to a 10% reduction in cabin noise compared to the previous Jazz model. Above all, it’s about economy and practicality and the hybrid easily averages 63 mpg. Competing models include the Ford Fiesta Active, Citroën C3 Aircross and VW T-Cross.