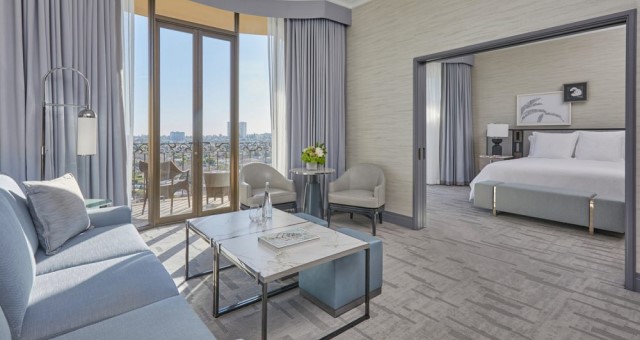 The first phase of the project includes the newly renovated guest rooms and suites in the Beverly Wing.

Dressed in soft pastels, he said the rooms represent Rodeo Drive luxury and offer guests a sanctuary of comfort.

“Beverly Wilshire, A Four Seasons Hotel, has given so many people over 94 years of life, passion and memories,” said Humig.

“It’s only fitting that we breathe some love and life into it with these exciting projects.”

The design of the rooms, suites, and hallways was initially inspired by British interior designer Syria Maugham’s 1934 White Drawing Room, which used mirror and ivory shades to stunning effect.

An imagined connection between this iconic British designer of the Art Deco era and Hollywood glamor of the 1920s and 30s was created specifically for Beverly Wilshire.

“Beverly Wilshire, A Four Seasons Hotel is a historic hotel, with a variety of room styles that have evolved over the years,” said Simon Rawlings, Creative Director of David Collin Studio.

“The vision created by David Collins Studio and Four Seasons aligns guest suites with the brand, location and level of luxury expected of hotel guests.