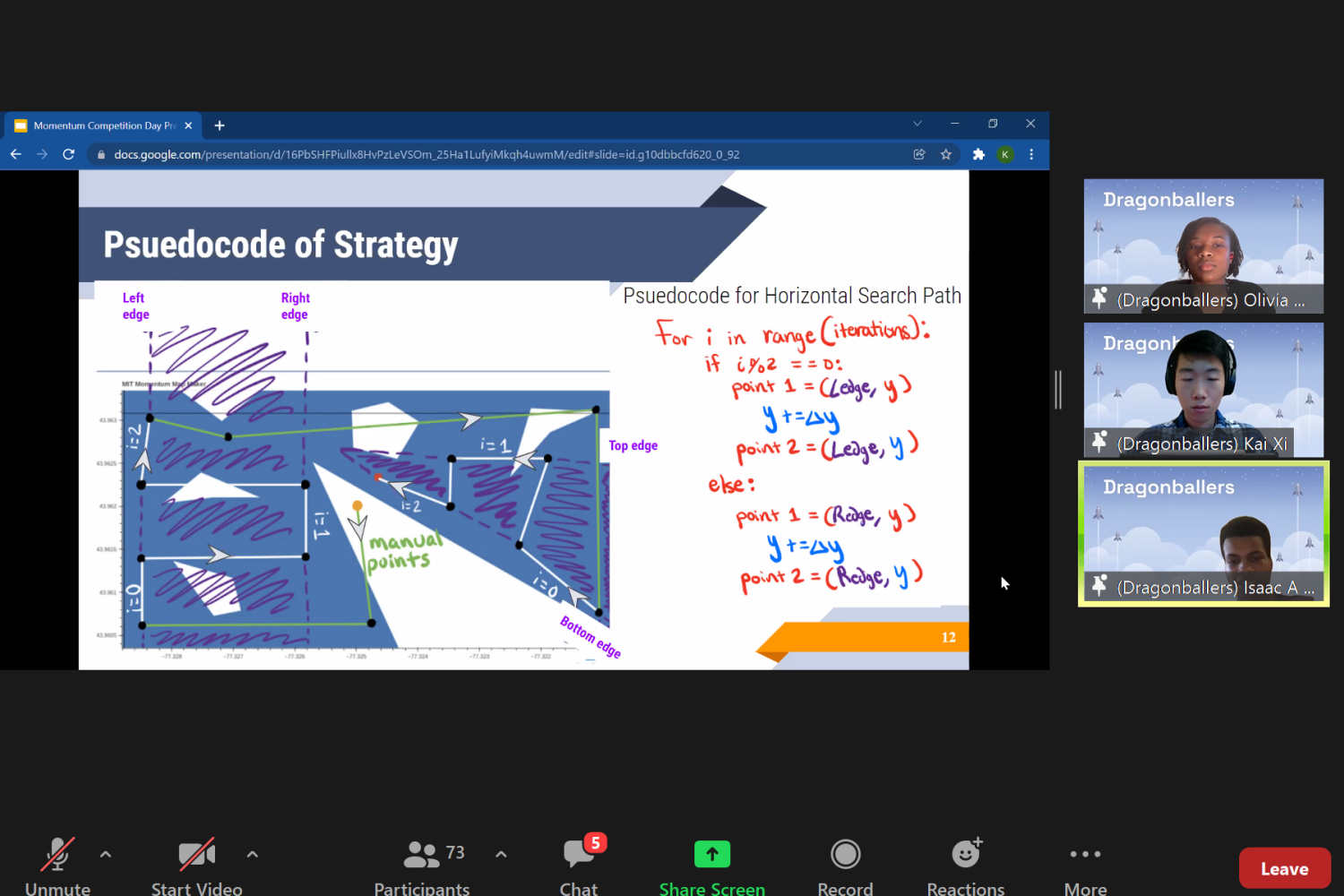 During this year’s independent activity period, a group of 29 freshmen and sophomores immersed themselves in forest firefighting and search and rescue missions. Not literally, of course; these projects were aircraft range simulations, but they couldn’t be more timely, given the increasing incidence of natural disasters attributed to climate change.

Both missions were at the heart of this year’s campaign Momentum program, a six-unit interdisciplinary design course facilitated by the Minority Education Office (OME). The course, which has been offered since 2007, provides an intensive, hands-on engineering experience tackling a real-world problem designed by one of OME’s industry partners. Along the way, students interact with industry representatives, gain valuable teamwork experience, and hone their presentation and interview prowess, among other soft skills. No prior programming or engineering experience is required to participate.

For Momentum 2022, students could choose from two challenges developed by Lockheed Martin: generate mission plans that task a virtual aircraft to collect water and suppress forest fires (Mission 1), or participate in a virtual research mission and rescue and detect lost people on a map (Mission 2). During the first week of the course, students received instructions from MIT professors and Lockheed Martin staff to get to work.

“They did a really good job of making sure everyone had the basics they needed to complete the challenge,” says Esha Ranade, a second-year computer science and engineering student who worked on the Beachheads team. “We even had a talk given by someone who had been in the navy and had been on search and rescue missions, so they were able to tell us what it was really like to work in the field.”

Over the next few weeks, as the students worked on their assignments in groups of three or four, they received training in skills such as public speaking and interviewing for internships, and even hosted a fair. employment. Deliverables such as proposal review and design review kept them on track, and Lockheed Martin staff were always available through Slack when students had questions or issues. The course concluded with group presentations judged by a panel of representatives from Lockheed Martin and several other companies, including Draper, Raytheon and STR.

Stephen Kubik, head of control laws and autonomy at Lockheed Martin, was the industry project manager. “It’s been extremely rewarding,” he says, noting that it was all about teamwork; 15 Lockheed Martin staff members provided support and guidance to students throughout the program. “We were all very enthusiastic about working with the students. There were a lot of late nights getting the code up and running all the parts of the case and the conferences, but it was all a labor of love.

For freshman Olivia Dias, who was part of the Mission 2 Dragonballers team, one of the most valuable aspects of Momentum was developing collaboration skills, especially with students, that you never had. encountered before. “Sometimes our team had conflicting ideas, so we had to come together to find the best solution. At the end of the day, we all realized that we wanted to do our best even though we all had different ideas. It was nice to be able to work collaboratively with others, but also to disagree effectively,” she says.

“Momentum reaffirmed my love for aerospace and my desire to be an interdisciplinary engineer,” says Kristoff Misquitta, freshman on the Mission 1 Water Nation team. “I also aim to continue to apply the structured approach to problem solving that Momentum has instilled: defining challenges in terms of goals, constraints, and complexity trade-offs will always be an essential skill.”

More than 80 people attended this year’s contest on Zoom in late January. Even for those who did not fully understand the technical aspects of the missions, the scope of the solutions offered by the teams was clear. “It’s not an easy problem and there’s no obvious solution,” says Ziyad Hassan, first-year student on the Mission 2 iFind team. “There are so many solutions that I hadn’t considered, and it inspired me and allowed me to broaden my thinking. It may be a competition, but ultimately it’s a learning experience.

While each student’s particular takeaways may differ, the program as a whole has been remarkably successful, especially as teams have had to work together remotely due to the pandemic, says Staff Associate II Gregory Jain of OME, which oversees Momentum. As an example, he notes that 95% of students said they would recommend the course to other first and second year students. He credits OME program coordinator Harpreet Singh and program assistant Deni Cifuentes as key contributors to the program’s success.

For Jain, the best thing about Momentum is “to see the students form friendships and work together as a team to prototype a solution to a real-world problem. It’s important to remember that these students are just students. freshmen and sophomores, so it’s amazing to see their talents shine in unison throughout the three and a half week course.

Given the success of Momentum 2022, Kubik expects Lockheed Martin to continue its involvement with the program in the future. “And if students can walk away from that with an interest in rotorcraft autonomy,” he says, “we consider that to be just a home run!”

2022-03-09
Previous Post: Who is on the BBC reality show lineup?
Next Post: Latest inclusions revealed for Rackley Athlete Support Program